With a history beginning in the 9th century, St Mark’s Basilica is one of Venice’s biggest and most visited sights. In today’s entry for the Iconic Roofs series, we will be learning more about the great basilica’s domed roofs and painted ceilings. 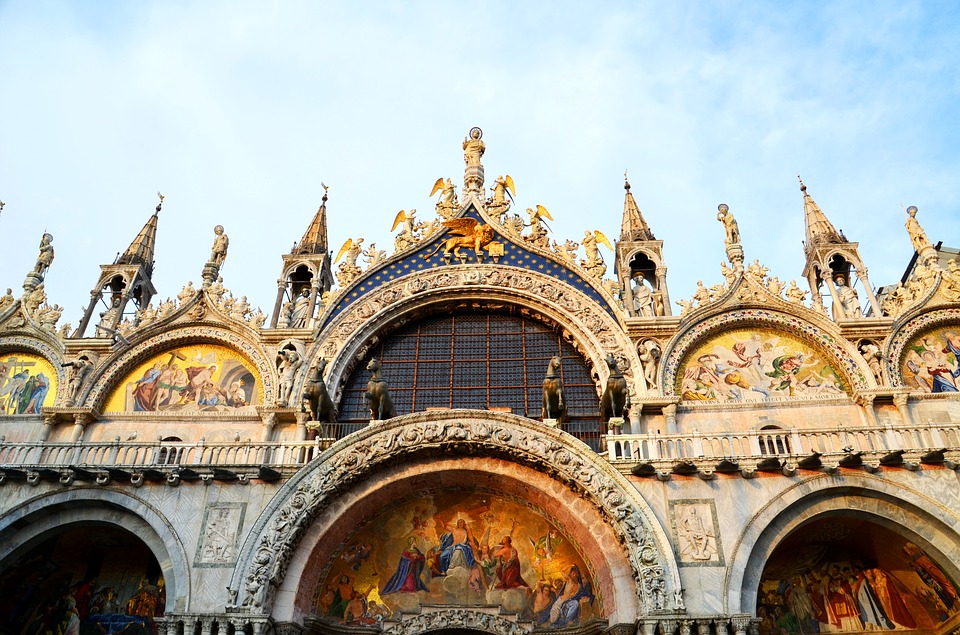 The basilica was built to house sacred relics stolen from Alexandria in 828 – legend says that the relics were hidden in barrels full of pork fat so as to prevent the city’s majority Muslim population from searching them. The tale of how the relics were stolen is actually a part of the basilica itself – a mosaic depicting the thieves and their dangerous journey is painted in one of many of the building’s domes. Mosaics are commonplace in St Mark’s Basilica – there are in fact over 85,000 square feet of them painted on the walls and ceilings. Most mosaics on the interior are stories from the Old Testament.

The building itself is designed in the shape of a Greek cross, and the roof is topped with five domes. It is believed that architects from both Italy and the Byzantine Empire were involved in its creation. The exterior of the west façade, pictured above, is divided into the upper register, the lower register, and the dome register. The lower register contains five arches with marble arches and portals into the interior of the basilica, whereas the upper register is painted with mosaics depicting various scenes from the life of Jesus Christ. Above the central window you can see the traditional emblem of Venice, the Winged Lion, topped with statues of St Mark and the angels. In the dome register, on the roofline, there are lines of statues with their own small pavilions, mostly of angels, but also including four bronze horses which are replicas of those taken from Constantinople in the Fourth Crusade.

The church has been consecrated numerous times through the 11th and 12th centuries. After its first consecration in 1085, the size of the church was expanded in all directions, particularly north and south, requiring the church domes to be rebuilt in brick rather than the original wood. This also meant that the church walls needed to be thickened in order to support the new work carried out on the roofs. An early form of free-standing demarcation would have been needed for the safety of the workers. As time passed, the outer walls of the basilica were covered in marble cladding displaying religious carvings, some of which were older than the actual church.

St Mark’s officially opened in 1094, meaning that it has stood in Venice for almost a thousand years. There were other churches on the site before then which the modern basilica grew off of – the bell tower has stood there since the 800s but had to be rebuilt in 1903 after a collapse the year before. The basilica’s balcony was damaged, however the church itself was perfectly safe. The bell tower itself is 99 metres high and was once a beacon for ships to navigate their way into the Venetian lagoon.

St Mark’s Basilica is an outstanding cultural landmark with one of the most impressive roofs which we have covered yet. It’s strongly recommended for anyone in Venice to visit and experience the majestic interior for yourself.

6 Common Safety Mistakes Workers Do When Working at Height
How to Effectively Perform a Rooftop Safety Audit: Part 1
Everything You Need to Know about Toeboards Installation and Removal
How Value Engineering is Being Used in Rooftop Applications
© Copyright 2020 D-Marc. All rights reserved | Website by Introspective
Conditions of Use - Privacy Policy - Cookie Policy
Demarcation Apparatus Patent